Fellow shines a light on a little-known medieval manuscript

Dr Miranda Griffin (2007), Fellow and College Lecturer in French at St Catharine's, has published a research article on a 15th-century account of travel to, and myths associated with, an Apennine mountain in Le Paradis de la Reine Sibylle by Antoine de la Sale.

Dr Griffin explained, “Although it’s a fantastic read, involving an underground community of women who turn into snakes on Saturdays, Le Paradis de la Reine Sibylle isn’t one of la Sale’s best-known works. Composed in the later Middle Ages, the Paradis doesn’t really fall into any of the recognised categories of medieval literature.”

The new essay entitled ‘On the Trail of the Sibyl’s Mountain: Antoine de la Sale’s Le Paradis de la Reine Sibylle’ was published alongside some of the remarkable illustrations of mountainous landscapes that appear in the original manuscript:

“This work is particularly apt for a Latourian interpretation, given that An Inquiry into Modes of Existence begins by asking the reader to embark on a demanding journey through difficult terrain. My essay discusses how Le Paradis de la Reine Sibylle reveals a very different attitude to mountains in comparison with modern conceptions: mountains are considered objects rather than destinations, although you can see the origins the presentation, which become more widespread in later generations, of these landscapes as attractive and forbidding.” 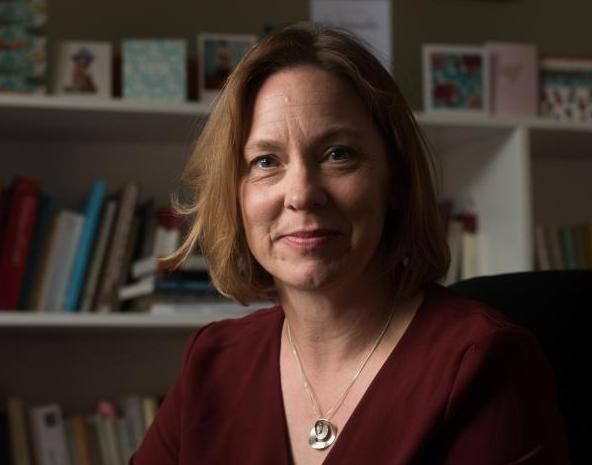 Coincidentally, an important part of Dr Griffin’s research involved travelling to landscapes very different to the one she normally inhabits at St Catharine’s in Cambridge was: one journey to the clifftops of Cassis, and another to a 16th-century chateau.

The essay was prompted by Dr Griffin’s participation in a 2017 study workshop for medievalists, which was hosted by the Carmago Foundation in Cassis, France. The group came together to explore Bruno Latour’s An Inquiry into Modes of Existence and how medieval literary culture might respond, with participants each adopting a Latourian lens when scrutinising different medieval works.

As the recently digitised version was not yet available, in order to continue her work in 2017, Dr Griffin travelled to access the manuscript as part of the collection of the Musée Condé at the Château de Chantilly in Oise, France:

“It was exciting to be able to touch the manuscript, feel the parchment and observe how the ink on adjoining pages was visible through the parchment. I honestly don’t think I would have approached the manuscript, or written the essay, in the same way without visiting the archive at Chantilly.”

Although the essay was initiated while she was Admissions Tutor and Director of Studies for Modern and Medieval Languages (MML) at St Catharine’s, Dr Griffin submitted her work for publication in 2018 when she was the College's Senior Tutor. Succeeded as Senior Tutor in April 2020 by Dr Holly Canuto (2020), Dr Griffin is now on sabbatical until she takes up a University Lectureship in Modern & Medieval Languages in conjunction with a Fellowship at Murray Edwards.

“I am looking forward to my final few weeks at St Catharine’s, including finishing my work co-editing a volume of essays dedicated to my PhD supervisor. I will also be starting to write a new book on landscapes and stories about landscapes in medieval French literature and how environments play a role in the development of narratives. I’m also co-organising and presenting a series of online seminars on medieval French over the summer, aimed primarily at academic colleagues who at this time of year would normally be meeting at conferences to exchange ideas and hear about one another’s research - I'm kicking things off with a seminar on Purgatory!”

Find out more about studying MML at St Catharine’s.