Document of the Term: the 1906 College Tennis Team

To coincide with the start of Wimbledon, the focus for the Long Vacation is the oldest Tennis Team photograph to be found within the Archives. Dating from 1906, and perhaps not taken in College at all, the photograph features 7 members of College. 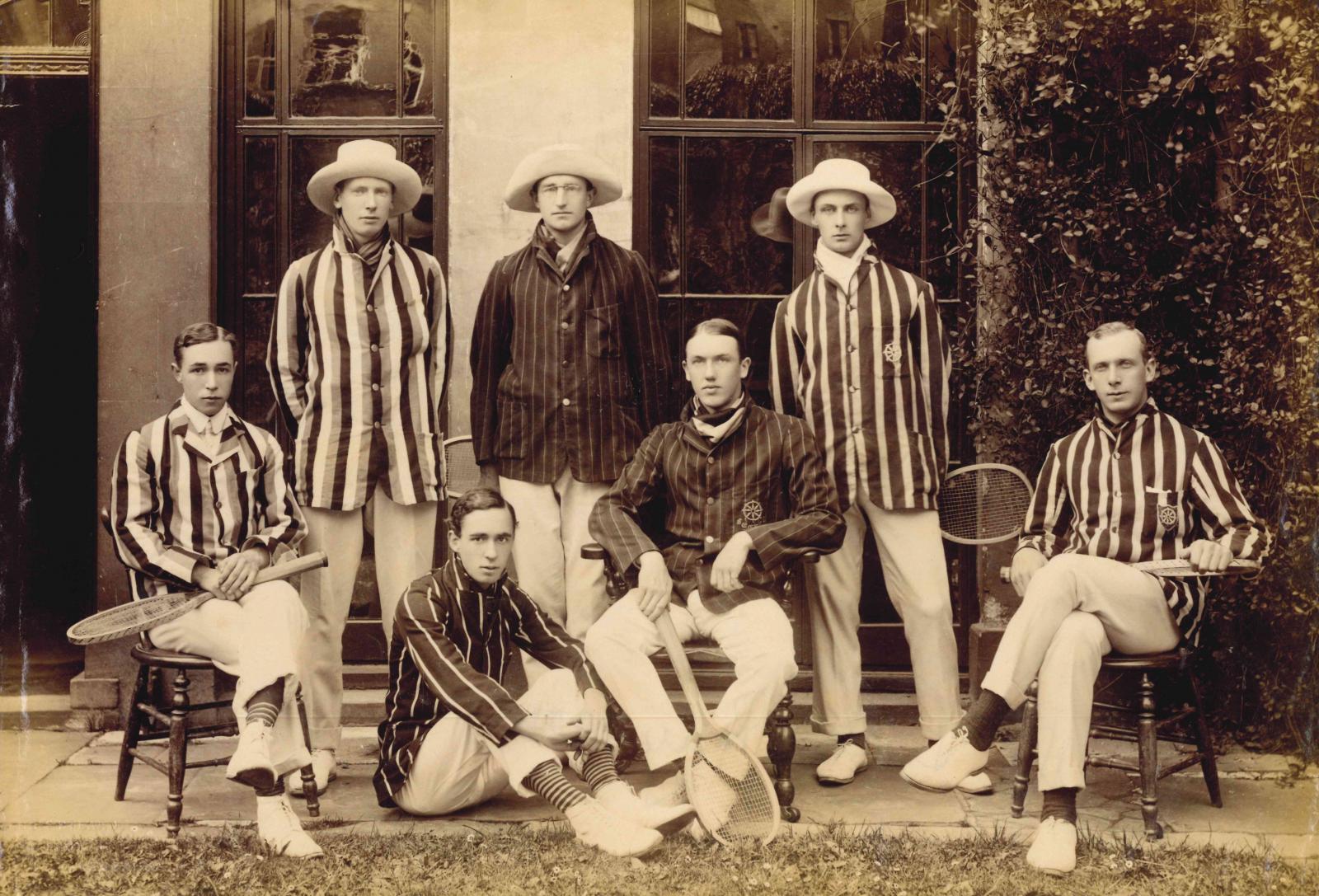 They were members of a small, but close-knit College and members took part in everything. Most of those featured played several sports for the College. Looking at the team in turn, we know that Gordon Belcher has come up with an Exhibition to read Classics. He gained his BA in 1907, but not before captaining the Cricket Club and holding the office of President of the Amalgamated Clubs. He joined the 3rd Royal Berkshire Regiment in World War I, gaining the rank of Captain. Sadly he was killed in action in France in May 1915.

Richard Pritchard also did not survive the War. He had come up to St. Catharine's in 1904 and read Law and History. He was Captain of the Tennis Club the year after this photograph was taken. He joined the Cambridge University Rifle Volunteers  in 1907 and was subsequetly a 2nd Lieutenant in the Devonshire Regiment. He died in August 1916 of wounds received in action.

Leonard Gilbert was also Captain of the Cricket Club and President of the Amalgamated Club. He came up in 1903 to read Classics. He was ordained after leaving College and was Rector of Stibbard, Norfolk.

Arthur Gullick went to Felsted School before joining St. Catharine's in 1904. He was Captain of the Football and Tennis teams. After graduating he spent some years in Russia before joining the The Buffs (6th East Kent Regiment). He was killed in action in October 1915.

Leonard Gullick came up to St. Catharine's in 1906. He went on to be a Secretary at a Golf Club before joining the Royal Naval Volunteer Reserve during the War. Afterwards he would work in insurance, but little other information about this gentleman is known.

Henry Watts, Captain of the Tennis Club, came up from Allhallows School, Devon to St. Catharine's to read Classics. After he graduated he took a diploma in French Literature at the Sorbonne and then became a master at Felsted School, Essex. He was commissioned at the outbreak of war in the 9th Essex Regiment and promoted to Captain in January 1915. He was killed in action in Otober 1915 while company commander.

Described as "a natural athlete and a born leader", Leslie Trist rowed, played cricket, tennis, football; and he was elected President of the Amalgamated Clubs. He had come up in 1901 to read Maths. Upon leaving College he joined Rossall School in Lancashire, where he would become Vice-Master before retiring in 1946.

It is a sobering thought that of those featured in the photograph over half would not make it through the First World War. In their assortment of blazers and hats there is little indication of their lives to come.