Although this piece is being written at the beginning of Easter Term, and May Week may seem like a long way away, this article will, for those currently revising, provide a reminder of what there is to look forward to after exams. For others it may remind them of their own May Weeks, when exams had finished and there was the opportunity to experience 'Cambridge' activities!

May Week is, rather confusingly, a week in June, after all the exams have finished. Originally it was a week in May, but since 1882, the festivities have taken place in June.

The year is 1910, but the activities on offer are those we would expect to find today. In 1910, the traditional May Week Concert took place in the College Hall. 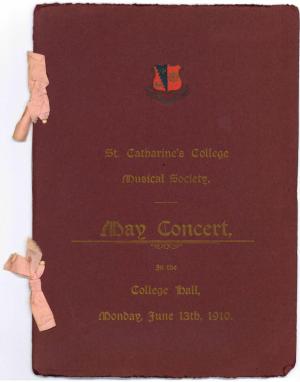 The concert was in two parts and featured a variety of pieces, many performed by those who were not members of the College. 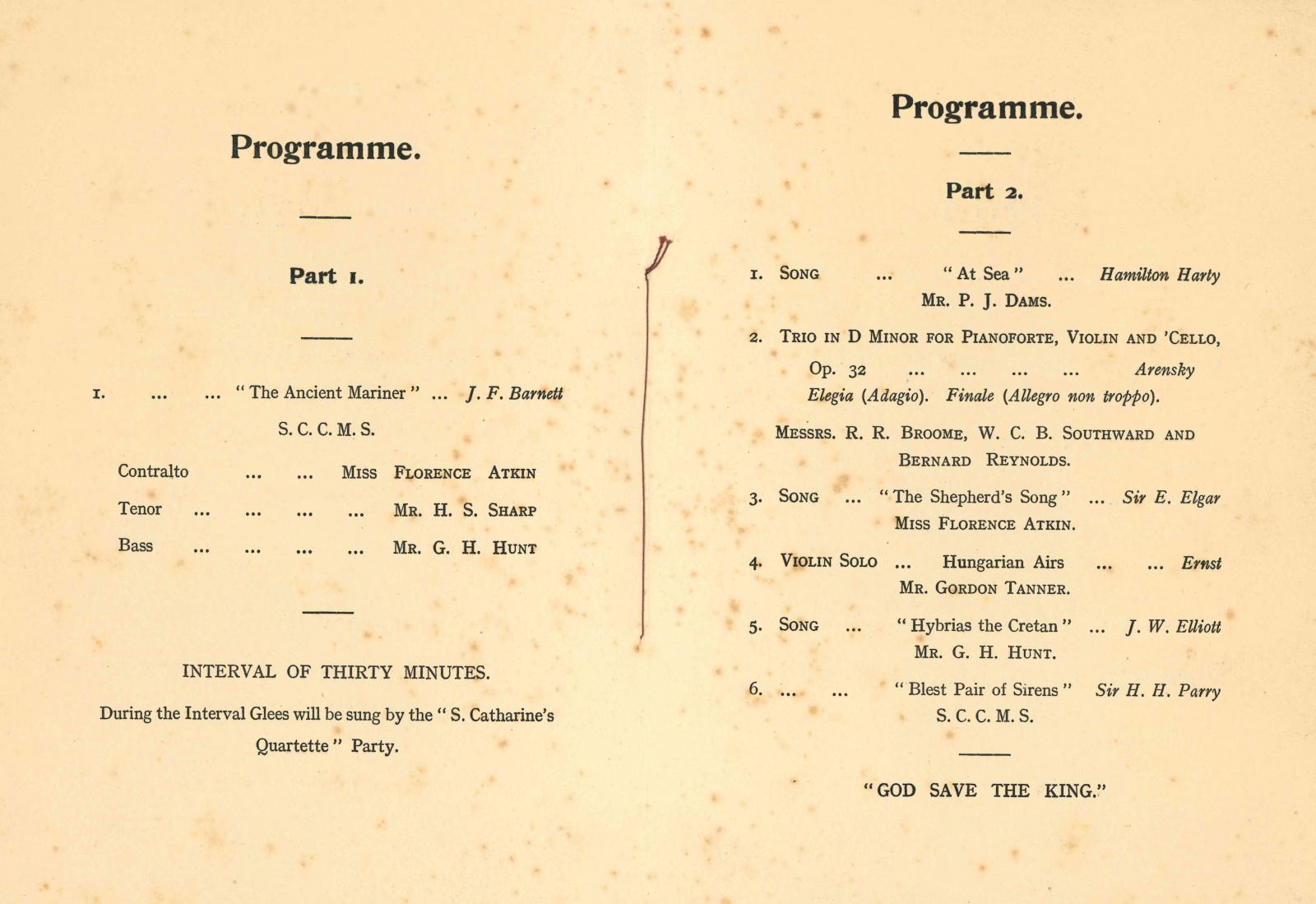 The Music Society's minute book of the time also survives in the Archive and there is an account of the Concert within the minutes. The report records that "during the interval unaccompanied part songs were sung...in the illuminated Court." The interval was "prolonged", so the songs were clearly popular! The report also notes that Miss Florence Atkin (contralto) and Mr Gordon Tanner (violinist) were accorded encores. Florence Atkin was a well-known singer of the time, appearing all over the country with the Choral Society and also teaching singing to private pupils in Cambridge. Nothing has been discovered of Mr Tanner.

One of the other highlights of May Week are the May Week Races or May Bumps as we know them today. For 1910, the Archive is lucky to have both pictures of the crews racing and the spectators. 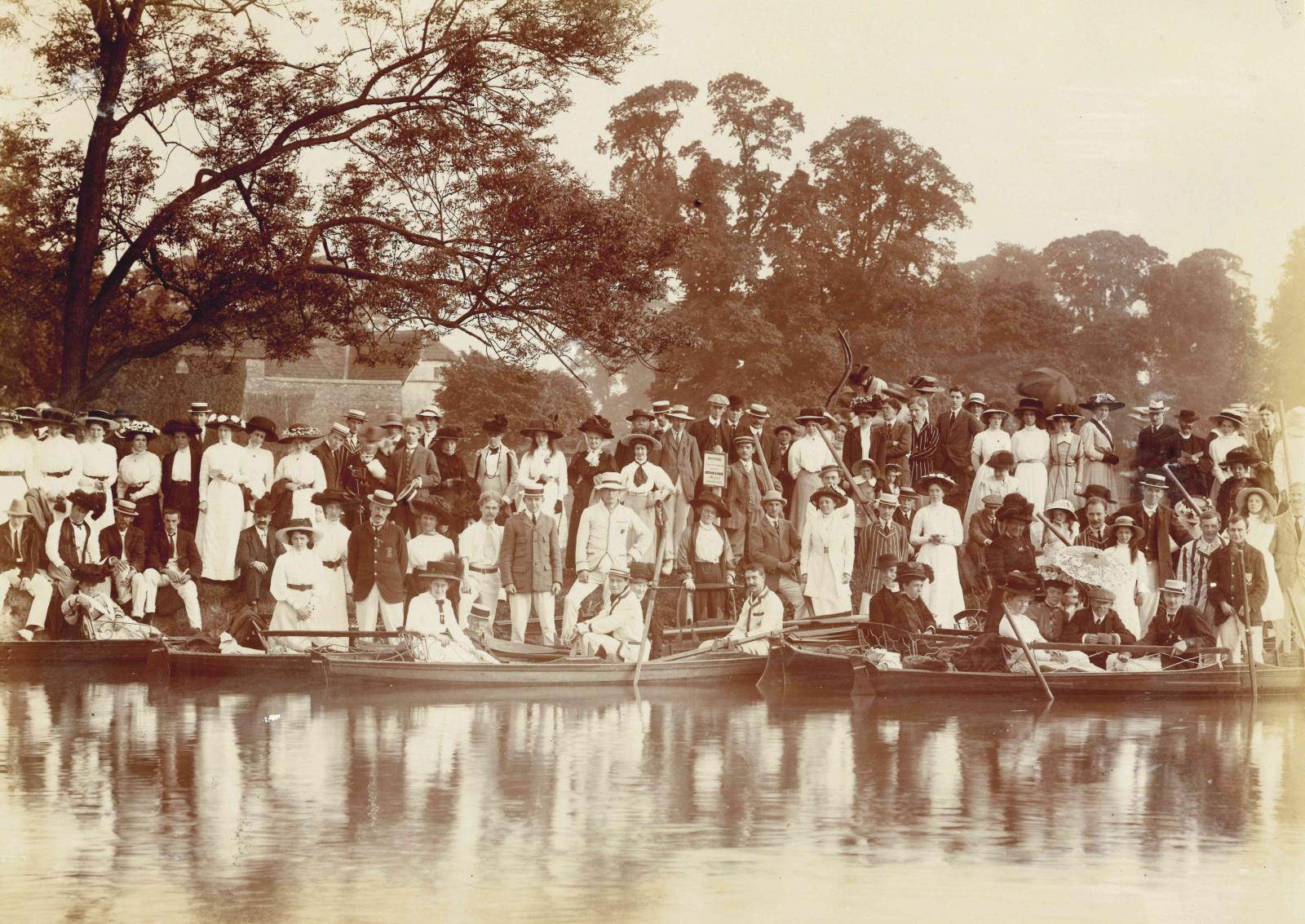 The photograph above shows the river bank on the Wednesday of May Week. The photograph comes from an album kept by F. M. Rushmore, Junior Bursar of the College in 1910 and latterly Master. 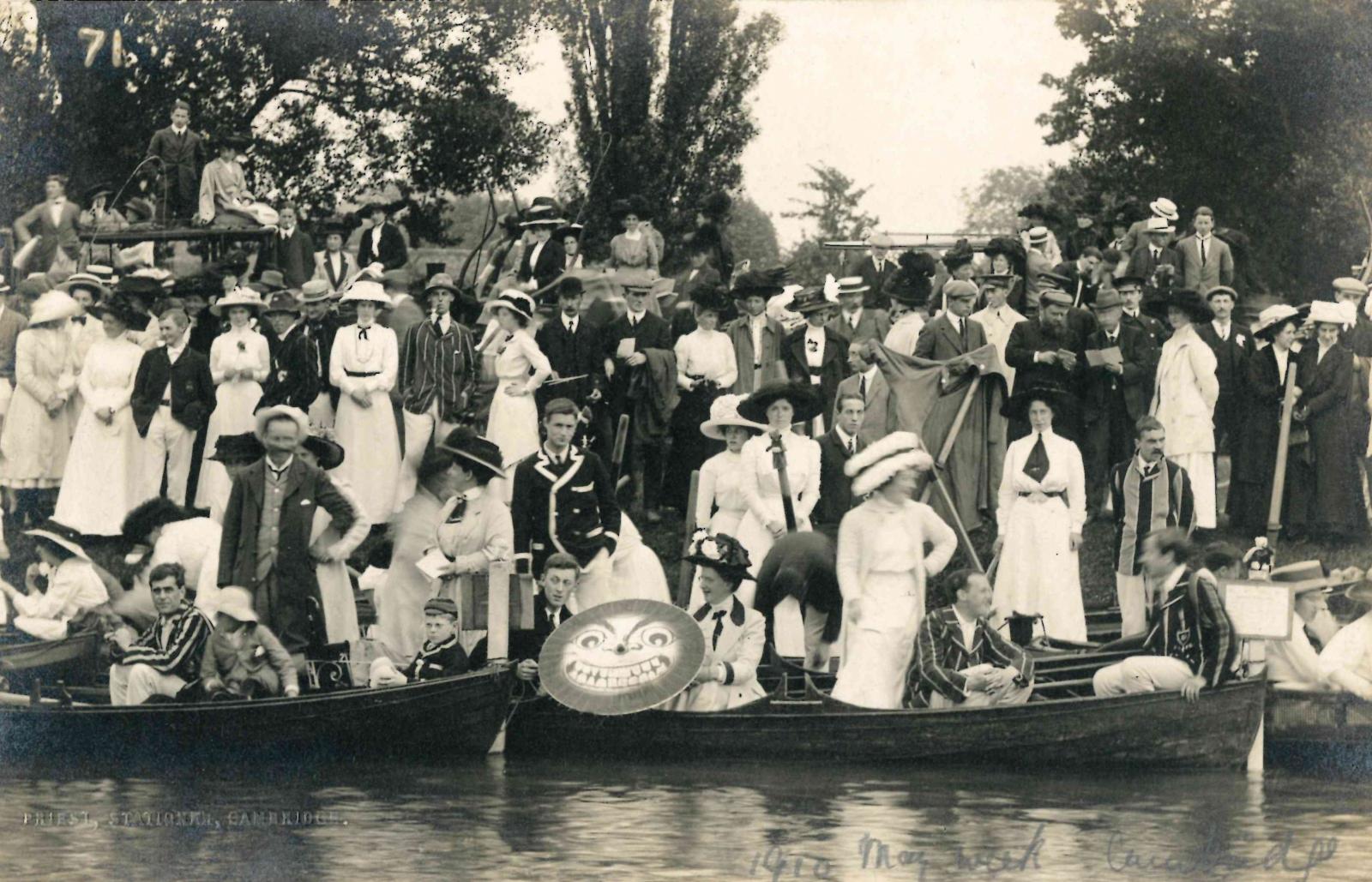 Another image of the May week spectators, this one featuring Japanese sunshades, designed and painted by John Purvis each May Week. Purvis, an undergraduate of the College in 1910, can be seen on the left of the sunshade. He would go on to be one of the greatest Archivists and Historians of the North of England.

The Archive is fortunate to have some of the accompanying photographs of the College crew on the river, being watched by the above spectators, and the Boat Club Minute Book giving race reports. The report of the May Week races is rather scant in detail but it is believed the College's boat made three bumps. The photographs below show the College Boat bumping Trinity Hall II at the Willows and the crew in a formal pose outside the Boathouse. 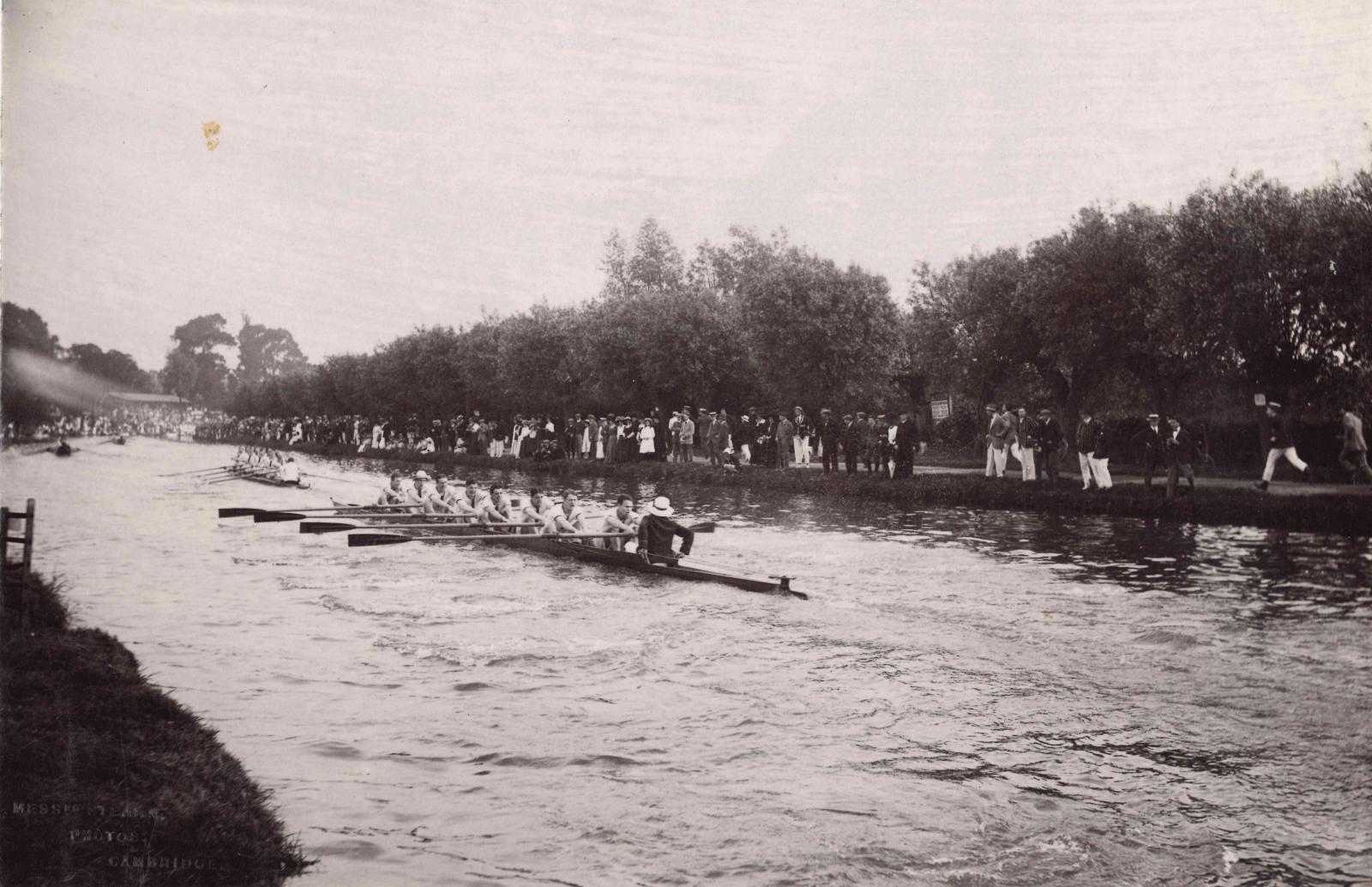 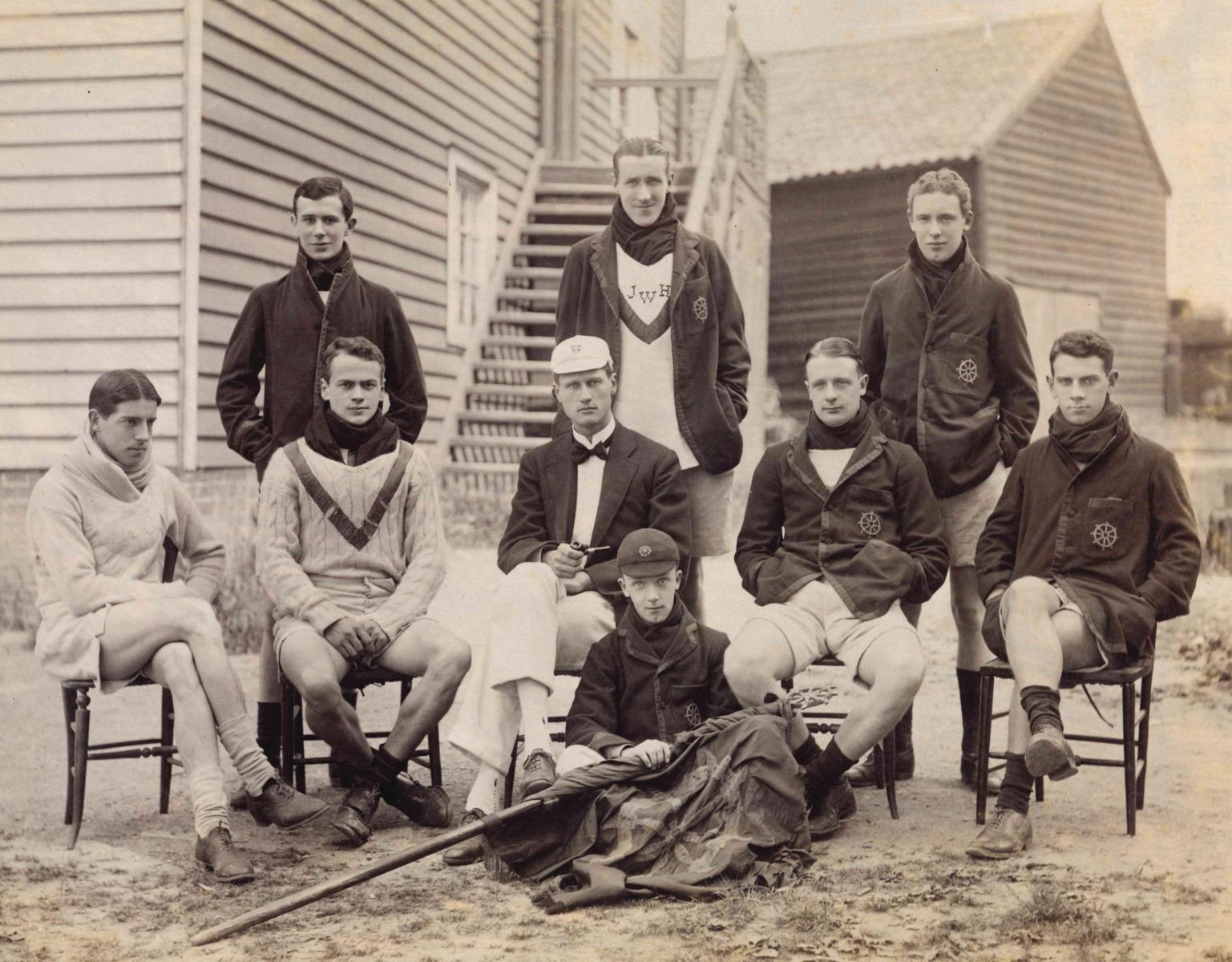 Unfortunately we do not have any surviving May Ball records from 1910. The College has not always had a May Ball each year, indeed, today the tradition is to have a full May Ball only once every two years. For a piece on an early St. Catharine's May Ball, see the the Easter 2012 document of the term.

If you have any records or photographs from your May Week, the Archivist would be pleased to make a home for them in the College Archive, if you no longer need them. Please send her an email (archivist@caths.cam.ac.uk) prior to sending in any material, thank you.