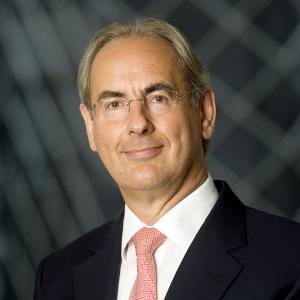 Sir Harvey McGrath grew up in Belfast and read Geography at St Catharine's, before joining Chase Manhattan Bank shortly after graduation. He moved to the Man Group in 1980, eventually becoming its chair (2000-7). In 2008 he co-founded Revere Capital Advisors, and in 2009 became Chair of Prudential plc, a post he held until 2011.

Harvey has been involved in many philanthropic organisations, including New Philanthropy Capital, Big Society Capital (which he currently chairs), the Integrated Education Fund in Northern Ireland, and a number of social cultural institutions in London and Belfast. He is also a generous supporter of the University of Cambridge and of St Catharine's: he currently co-chairs the University's 'Dear World' Campaign board, and the St Catharine's McGrath Centre, which opened in 2013, was named in recognition of Harvey's support to the project.

Harvey was knighted in the 2016 New Year's Honours list, for services to economic growth and public life.