St Catharine’s postgraduate student Simon Groome took a break from his Master’s degree in Biological Anthropology to compete in the finale of the British University Karting Championship (BUKC), which was a 24-hour race at the Teesside Autodrome, Middlesbrough, on 18–19 June.

Simon has always been interested in motorsport and got a taste for racing during his undergraduate studies when he represented King’s College London in the BUKC, which can see karts reach speeds of up to 75 mph. Since arriving at St Catharine’s in 2020, he has raced for the University as part of the Cambridge University Automobile Club (CUAC) against other universities – when COVID-19 has allowed racing to go ahead.

Simon explained, “The racing season this year was due to start in January but was delayed until April due to the pandemic and I’ve been racing every couple of weeks since, building up to the 24-hour race in June, which is a highlight of the calendar.”

This weekend’s race involved CUAC fielding two teams, with drivers alternating driving duties (two stints apiece), supporting changeovers and pit stops, and sleeping in a tent at the side of the track. They took on 55 other university teams from across the UK (the University of Oxford did not send a team).

Simon reported, “This year was quite remarkable in that there was only a 0.7 second gap separating Birmingham University in first place from Swansea University in second place, when several laps would separate them in a typical year – it was a tense finish! Mechanical issues dictated the fates of many teams, including Cambridge. While we held own in the top 20 for the first 10 hours or so, our gears failed twice and our left wheel detached a few hours later, which cost us dearly. There’s definitely an art to finding a balance between having good pace and driving in a mechanically sympathetic way to ensure these failures don't happen. We had mixed results on this front.

“As a result, we finished in the middle of the pack in 32nd place (out of 57 teams). I'm nevertheless proud of the team. All of us had strong pace, and we can leave knowing that we were in the top 20 teams, at least in terms of speed. We also didn't have the benefit of team radio or telemetry, which some of the other teams use. It's not uncommon for teams to have to retire completely, so we can count ourselves relatively fortunate. I was personally lucky to be able to drive the coveted 3am stint, when you can see the sunrise over the course of your stint. You're faced with a conundrum; to either wake up in a daze having had 3 hours' sleep or brave the all-nighter on energy drinks. I chose the latter option.” 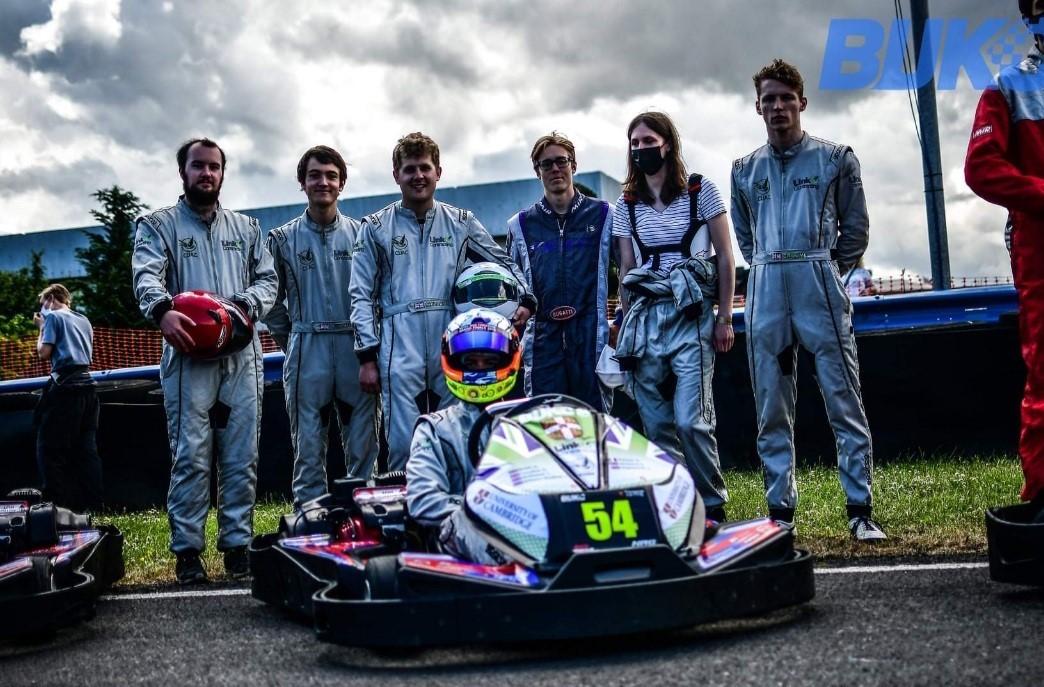 Pictured: Simon (standing on the far right) with the CUAC team at the Teesside Autodrome (credit: Tom Fox).

For students looking to join the team next year, Simon has some helpful words of advice:

“Sign up to join the CUAC early at the start of the year (during the freshers’ fair), because you will need to allow time to earn your racing license before the season begins. The last opportunity to do this was in January this year, for example. Not everyone passes on their first test day, and many need a second or third to get up to speed. Also, don’t worry if you don’t have any experience! Although there are very experienced drivers at the BUKC (some are known to have raced professionally in Formula 3, for example), I’d never driven a proper kart before my first test day and it’s all down to how quickly you learn.”