John Addenbrooke (1680-1719) was the founder of Addenbrooke’s Hospital in Cambridge.

John Addenbrooke spent a third of his short life of thirty nine years at Catharine Hall (now St Catharine’s College), where he was a Scholar, Fellow, Lecturer and Bursar. On his death in 1719 he left the sum of £4,500 in his will “to hire, fit-up, purchase or erect a building fit for a small physicall hospital for poor people”. He stipulated that the hospital should admit those of any parish or county. Addenbrooke’s Hospital first opened its doors on 13th October 1766, one of the earliest voluntary hospitals in the country, comprising 20 beds, with a staff of 3 physicians and 3 surgeons and 1 matron.

The hospital was originally located on Trumpington Street, Cambridge, opposite the Fitzwilliam Museum, until the demands of the NHS outgrew the old buildings and Addenbrooke’s Hospital relocated to the southern edge of the city in 1976. The original buildings are now part of the Judge Business School. The modern day Addenbrooke’s Hospital with over 1,000 beds lies at the heart of the Cambridge Biomedical Campus, one of the largest centres of health science and medical research in Europe and the largest such centre in the UK. It is also the home of Cambridge University School of Clinical Medicine.

John Addenbrooke was born in the village of Kingswinford in Staffordshire in 1680. Nothing is known about his early life before his arrival at Cambridge and admission to Catharine Hall on December 13th 1697, though he came from a clerical background. At Catharine Hall he joined a community of 40 scholars comprising the Master, Fellows, and students and would have shared a room with 3 or 4 others. It is probable that Addenbrooke had originally intended to enter the Church and it is not known at what point he decided to study medicine. He took an Arts degree (B.A) in 1701-2 and then an M.A. in 1705, before embarking on his medical degree assisted by a series of scholarships. At the same time he was elected a Fellow of Catharine Hall. Cambridge produced a number of distinguished physicians during this time, but the teaching was not well organised. Regius Professors of Physic of the time never lectured regularly and the University did not appoint professors of anatomy, chemistry and botany until the early years of the eighteenth century. The University Calendar for 1702 states that “A student of medicine in this University is not required to attend any lectures but is left to acquire his knowledge from such sources as his discretion may point out.” Not a recommended approach today!

Medical students would have studied the traditional medical texts and sought out medical Fellows for private tuition, supplemented by visits to the apothecary. For the fortunate student, colleges provided rooms for dissections and chemistry experiments. Addenbrooke did not take the MB degree but instead proceeded directly to the MD in 1710, perhaps because of his standing as a Fellow in the college. In 1706 he had received his licence to practise medicine from the College of Physicians.

Addenbrooke was particularly interested in materia medica and he lectured on the subject in Catharine Hall from 1705. He amassed a large collection of specimens, which he presented to the college. This chest is now located in the Armitage Room and still contains a wide variety of drugs and medicines of the time from around the word, some labeled by Addenbrooke himself. He also donated a number of his classical medical texts and more recent works to the College Library.

In 1711 Addenbrooke left Cambridge with his newly wed wife to practise medicine near London, but exactly where and with what success is unknown. Unfortunately, ill health forced him to retire to Buntingford in Hertfordshire in 1719. He died there on 7th June 1719 and has buried in the chapel of Catharine Hall, where the tomb and its inscription can still be seen.

His medical practice must have met with some success because in his will he left £4,500 for the foundation of a hospital. The Master and Fellows of Catharine Hall were charged, as Trustees, to direct the building, which finally opened forty-seven years after the founder’s death.

Although there are no surviving portraits, contemporary accounts describe John Addenbrooke as tall and thin, of a studious bearing, and he wore a wig. He was said to be of a retiring disposition, serious, earnest and somewhat austere. However, there is no doubting his vision and generosity.  Presumably his medical practise amongst the poor of the time impressed him with the total inadequacy of parish relief for the sick, and prompted him to found a charitable hospital for the people of Cambridge and its surroundings. 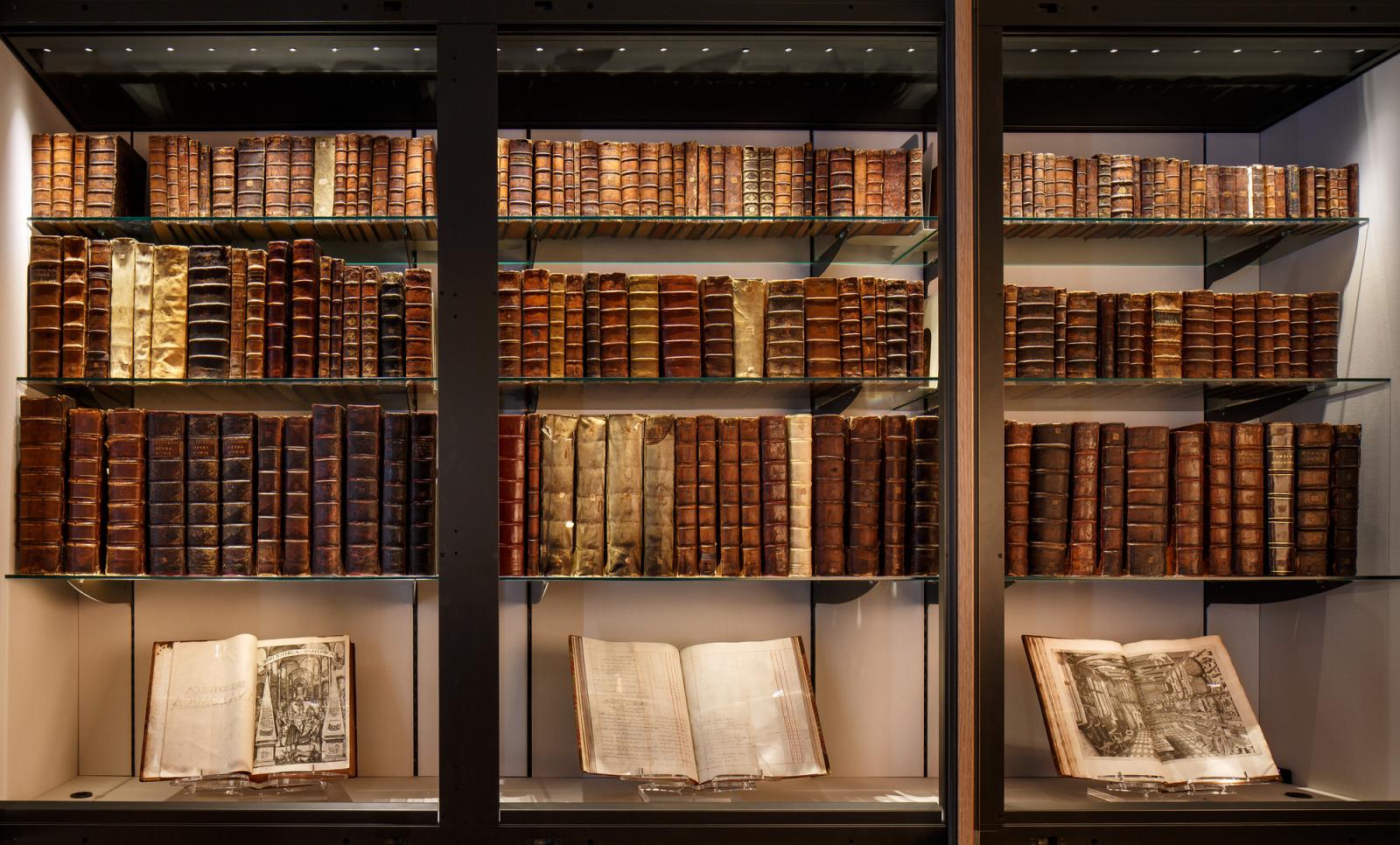 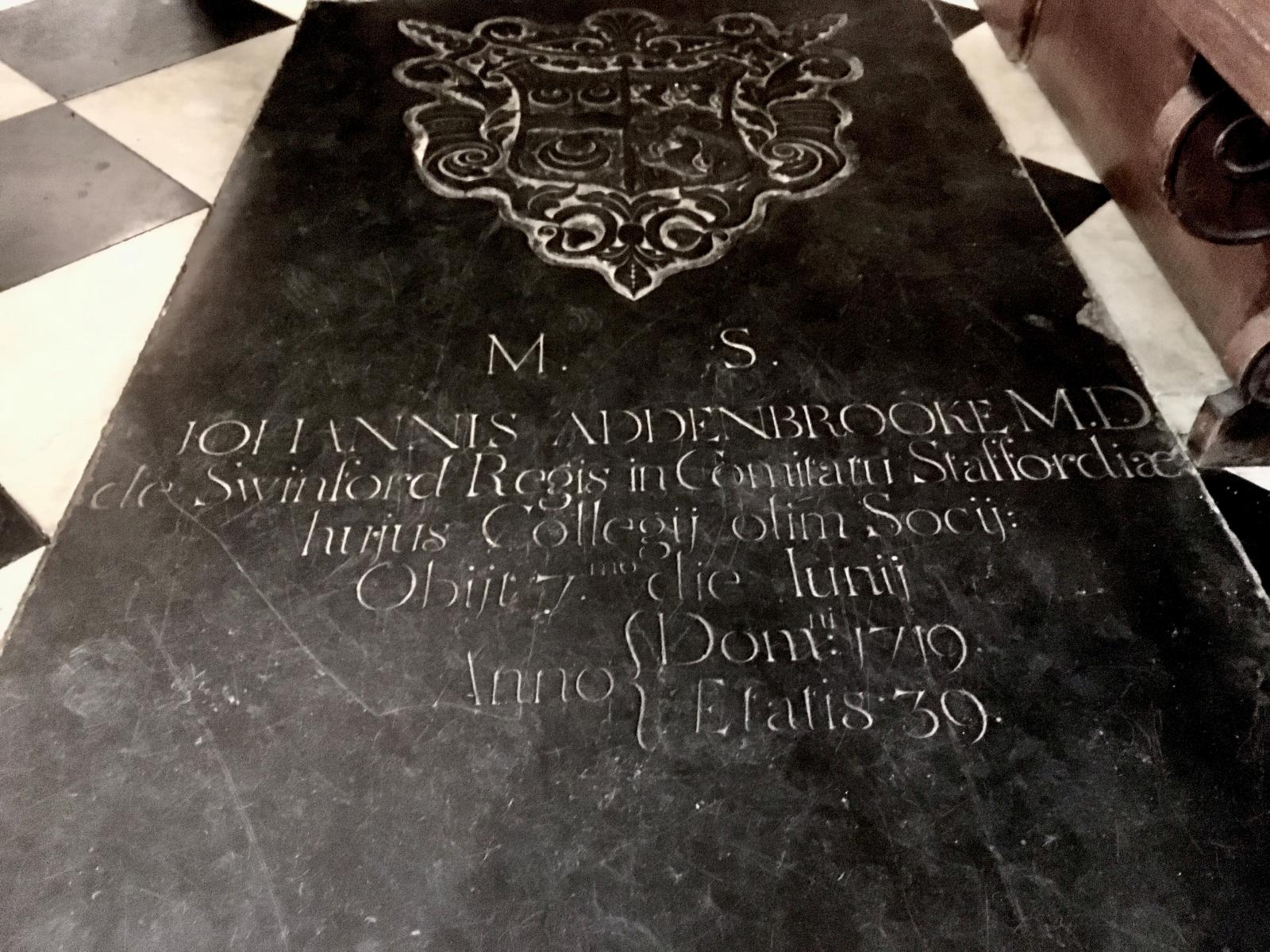 The Tomb of Dr John Addenbrooke in the College chapel 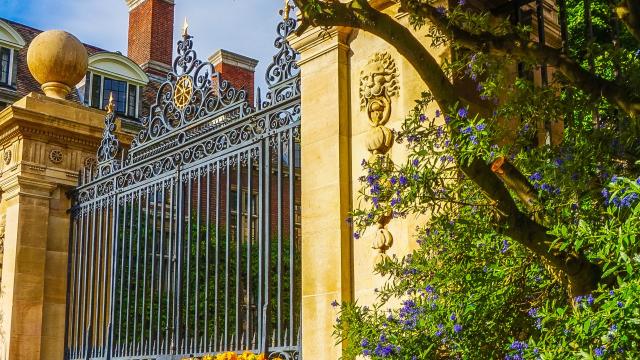 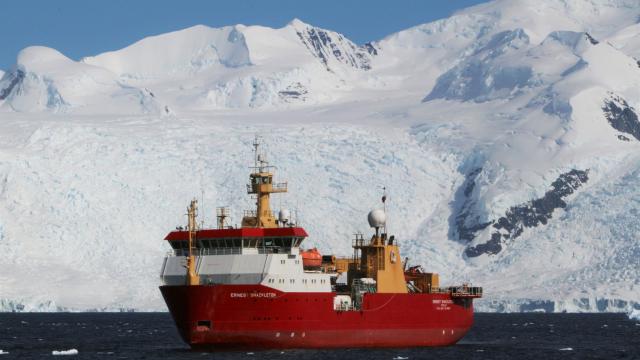 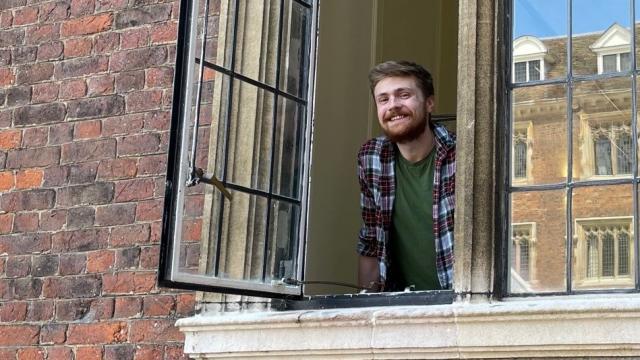