College Societies during the Great War

This article looks at the activities of the students who remained at St. Catharine’s for part of the War.  Despite many students volunteering for the army at the start of the War, and with conscription being introduced in January 1916, there were still students wanting to come up: either they were not quite 18 and it was seen as sensible to matriculate and study until being called up (and it was possible to join the ‘B’ Company of the Cambridge University Officer Training Corps if you were under 18 or over the conscription age) or they were overseas students, often from Asia.  Matriculations in the year 1913-14 were 42, War was declared in early August 1914 so many students who may have been expected to arrive at the College in October never came. Matriculations for 1914-15 were 26, the same number again arrived in 1915-16 but in 1916-17 numbers dropped to 12. They began to rise again in 1917-18, to 18 and then 32 in 1918-19, by which time the end of the War was in sight. In 1919-20 numbers of matriculants rose dramatically to 101. 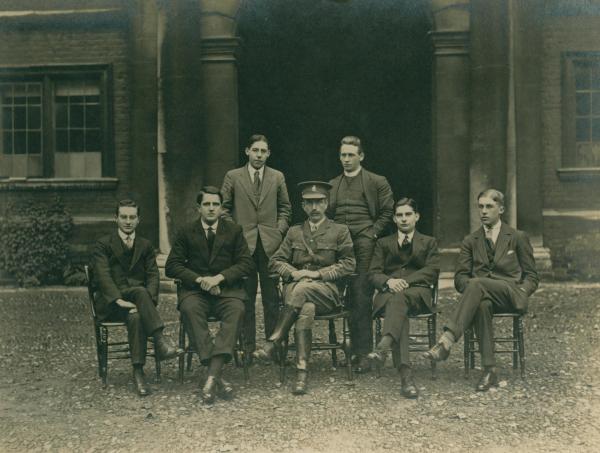 Few Fellows were around to teach during the War; those who were were often heavily involved in the Cambridge University Officer Training Corps, such as F. M. Rushmore.  Within College several offices were undertaken by one Fellow, such as Southward who was Tutor, Lecturer in Theology and Music, and Chaplain.

With so few students, College clubs and societies often ceased activities.  A note in the Boat Club Minute Book for October 1914 reads “This term started under the most unhappy circumstances owing to the war.  Freshmen were not quite so numerous and the members of other years were considerably in the minority when their numbers are combined with last year.”  The minutes cease until February 1919 when it is noted that an effort was being made by F. M. Rushmore to restart rowing, with a boat sent to the March 1919 CUBC races.  With so few students College games were much reduced too, but Professor Steers, the noted Geographer who came up in 1916, recalls that some rugby was played on the University Field on Grange Road.  The College swimming pool, a small tank ten by five or six yards, on the site of today’s John’s Building in Sherlock Court, was not as far as memories serve, used during the War.

The College Music Society lasted into 1915, but its May week concert of 1915 was a subdued event.  The minutes record that owing to the War it was a sombre affair unlike the previous year when “Quartettes [were] sung under the archway during the interval” and owing to the fine decorations and quantity of refreshments the interval lasted over an hour.  In 1915 the “evening was divested of all festivity which would be out of place at such a time”.  The concert finished with Stanford’s Last Post: a poem by W. E. Henley about the Boer War, set to music by Charles Stanford in 1900.  The Music Society was not to meet again until the 3rd February 1919 when a concert in the Chapel was discussed.

One Society that did flourish throughout the War was the Debating Society.  The first debate of the Michaelmas Term 1914 had the motion “This house is of the opinion that Europe will emerge from the present war physically, morally and in every way improved”.  It was carried 17 to 11, with 3 abstentions.  Later in the term the proposition “Though earnestly desiring the speedy defeat and adequate punishment of the German nation, this House would deplore any attempt to reduce Germany to a position of comparative insignificance among the powers of Europe and the world in general.” This was carried 13 to 9.  Perhaps the cosmopolitan atmosphere of Cambridge before the War, with students from all over the world in attendance, meant anti-German feelings were not as strong, certainly in the early stages of a War that was initially expected to last only a few months.  For part of the War, the Debating Society was presided over by two of the overseas students, Ibrahim Rashad, an Egyptian, who came up in 1917 to study Agriculture and latterly Economics; and by J. A. Brito from Colombo, Sri Lanka who studied History.  To ensure a good audience the Society usually joined with one or two other Colleges and Fellows were invited.  On several occasions there were ladies present, provided chaperones could be found.  The first such occasion occurred on the 14th November 1917 when Mrs Southward expressed the thanks of the ladies for being invited.  On the 4th December the meeting was held in the dining hall for the first time and the motion debated was “the barrier existing between the female and male members of the university should be removed.”  Five ladies delivered speeches during the debate, two from Girton and three from Newnham College.  The motion was carried by 31 to 6 and during the vote of thanks it was hoped that further debates including women would occur.  It is somewhat ironic that just four years later, when a vote was taken in the University in 1921 to award degrees to female students, it was defeated.  Debates ran throughout the War, with many motions having a ‘war’ theme.

Little is known of what happened to other societies during the War.  May Balls began again in 1920 and the Midnight Howlers (a Revue Society known for College-inspired humorous songs) were formed in 1921 with the Shirley Society coming to life then too and the John Ray Society forming shortly afterwards.  Most of the sporting clubs and the Boat Club restarted in 1919 or 1920 when numbers began to rise as old students returned and new students arrived again in significant numbers. 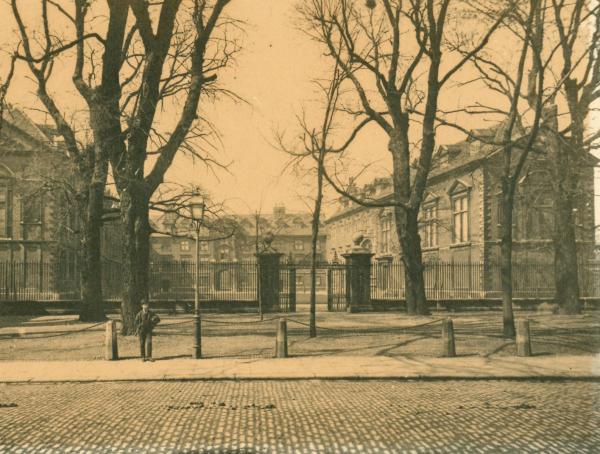