The Great War: The Forgotten Contribution of St. Chad's

With the arrival of the centenary of the start of World War I, the Archivist wanted to look into the history of the College during the 1914-1918 period. Research initially led to the conclusion that the College effectively shut down during the interwar years, with students volunteering for the army at the outbreak of war and latterly being called up, causing numbers to fall dramatically. By 1917, all undergraduates could be accommodated in B, C, and D Staircases, and most College Societies had ceased activities. However, the chance reading of an article in the Cambridge News in April, which referenced St Chad’s as a ‘VAD Hospital’ led to the discovery of a hitherto little-known aspect of College wartime history.

In 1877 the College had leased the land upon which St Chad’s now stands to a Robert Burn for 100 years. Burn was a Fellow of Trinity, also occupying the position of Dean, Tutor in the College and Praelector in Roman Literature and Archaeology. He was also President of the Cambridge Antiquarian Society. He was leased the land in the expectation that he would build a suitable dwelling house. Work was already underway by the time the lease was signed in 1877 and although it has not been possible to identify the architect with certainty, it may have been WM Fawcett, who had worked on St Martin’s (sold by St Catharine’s to King’s College School in 1952) next door, and who had previously re-modelled the entranceway to our Hall in 1868. Burn died in 1904 and the house passed to his wife; she in turn passed away in 1915 and the lease was sold to Adelaide Laura Ward, wife of Sir Adolphus Ward, Master of Peterhouse. Enquiries with Peterhouse have not yielded an explanation as to why the Wards took the lease of a private house, only to lend it immediately to the Red Cross. Peterhouse was full of officer cadets in training in 1915 and the Wards may have been seeking a refuge – but this is only a guess. All that is known for certain is that having secured the lease in March 1915, Adolphus Ward offered to lend St Chad’s to the Red Cross Society to use as the first branch of the 1st Borough Red Cross Hospital.

The hospital at St Chad’s opened in May 1915. It worked closely with the 1st Eastern General Hospital, a Territorial Force Hospital initially headquartered in Trinity College, with beds in the Leys School, and later in buildings on the cricket grounds of Clare College and King’s College to the south of Burrell’s Walk. The 1st Eastern General had over 1,500 beds by the end of 1915, and carried out up to 50 operations a day. It remained open until 1920. Today it is the site of the University Library and the Memorial Court of Clare College. St Chad’s, being so close, would have been an ideal branch, and took over many of the duties of the auxiliary hospital that had been based in Cintra Terrace, Hills Road, before it closed in March 1915, having cared for many Belgian wounded soldiers. In a 1915 Red Cross report, St Chad’s is described as being ‘most suitable and convenient, with lofty, sunny rooms, almost all facing south, and a delightful shady garden with two lawns’ in contrast to Cintra Terrace being ‘old-fashioned and inconvenient for working’. The report goes on to describe how St Chad’s was improved by Adolphus Ward with the addition of electric lighting!

St Chad’s originally had 36 beds and was furnished using Red Cross Borough Funds. The number of beds is believed to have increased to 50 by the end of the war. The Commandant or Assistant Commandant slept at the Hospital each night with local volunteers, or ‘VADs’ (Voluntary Aid Detachment) providing additional support. The 1st Cambridge Troop of Girl Guides also helped out, regularly visiting on Saturday afternoons and Sundays. The hospital also had a resident sister in charge; one of those sisters has been identified as Miss Kynaston. The Commandant was a local woman, Miss Gaskell, who lived at Great Shelford and had read Classics at Newnham College. She was a keen hockey player, heading out to Australia in 1914 with the first women’s hockey team sent from this country. Trained nurses who worked at the hospital included Robina Brown, Ellen Harrison, Doris Larter, Lilian Kidney, Emily McNeile, Kate Brightwell and Sarah Turner. Margaret Darwin, later Margaret Keynes, granddaughter of Charles Darwin, also volunteered at St Chad’s, undertaking massage, then a relatively new treatment for war wounds.

Auxiliary hospitals were for patients with lessserious wounds, and were often used for convalescence. Nurses were usually members of the local Voluntary Aid Detachment, who were trained in first aid and home nursing. Servicemen often preferred auxiliary hospitals to military ones, as they were not so strict, were less crowded and the surroundings were generally more homely. The gardens at St Chad’s were therefore seen as a particular asset, with space for croquet, bowls and other games. The Hospital fielded cricket and shooting teams, which had good records in competition. However, the prowess of the football team in the autumn of 1915 eclipsed all other success. The team of patients played against other regimental and able-bodied teams, and suffered only two defeats with a record of 42 goals for, 15 against! Charging at two of these matches brought in enough funds to provide a recreation room, which included a miniature billiard table. 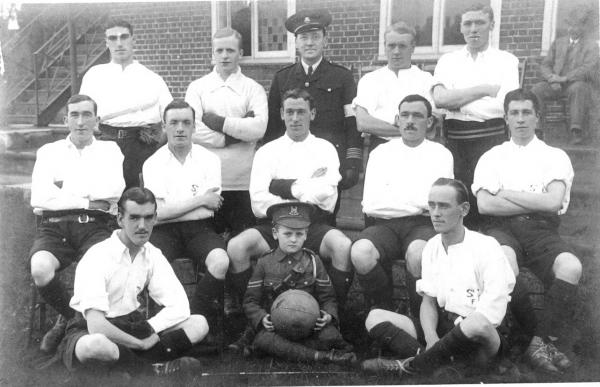 The recreation room was well-used at Christmas 1915. Games were played there on Christmas Eve and on the evening of Christmas Day. The games included snapdragon, traditionally played on Christmas Eve, which involved heating brandy in a bowl, placing  raisins in the brandy, then setting it alight, before seeing who could pluck out the raisins at the risk of getting burnt! At breakfast on Christmas Day 1915 each man received a parcel from the staff at the hospital and a box of chocolates from Cadbury’s. An anonymous donor in the town provided everyone with ‘smokes’. Continuing the sporting theme, a football match was played against the Essex Regiment on Boxing Day: the hospital team won by 5 goals to 1. An evening theatre trip to the ‘New Theatre’ (in St Andrew’s Street, just along from Emmanuel College on the other side of the road and demolished in 1960–1) rounded off the festivities.

Statistics have only been discovered for 1915, but for May-December 1915 there were 36 beds and the hospital received 111 patients. In that first year, many were French-Canadian soldiers. The reminiscences of Annie Esler, a ‘VAD’ who worked there for six months in 1915, recall the French Canadians being a ‘rough tough lot’ with ‘rough ways’; ‘they were rough with each other, squabbling a lot and often knocking the place about’. She remembered Cambridge being full of soldiers, with all the Colleges being so packed that soldiers had to be billeted in private houses. 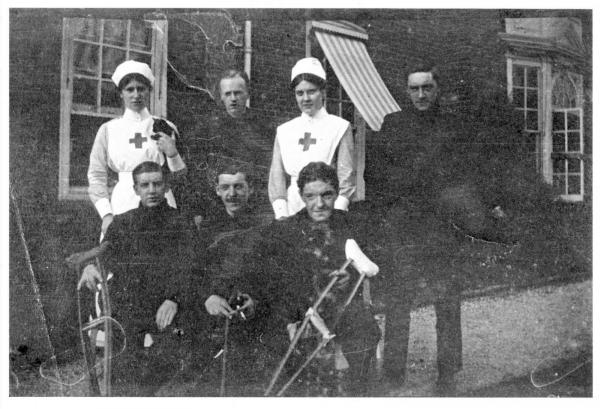 St Chad’s remained open until 5 May 1919. It was subsequently leased to Lord Adrian who rented it to New Hall (now Murray Edwards College) as accommodation from 1957–65. New Hall housed 20 undergraduates there, along with a housekeeper and a Fellow. St Catharine’s repurchased the lease in 1964 and used it to house graduates for two years before converting it into flats for married graduate students. The first phase of the new accommodation on the site was opened in 1978.

With thanks to Sarah Fletcher and Roger Stratford for additional research.