The End of the Great War

The year 2018 marks 100 years since the end of the First World War. This article forms the last in the series commemorating the role of St Catharine’s and her members in the conflict. Here we look at what some of our students did during the War, and what they would go on to do afterwards. Undoubtedly, the War made its mark on all those who experienced it, and the confines of College – with its gate book recording the hour undergraduates returned in the evening, and compulsory attendance at Hall and Chapel – must have seemed quite at odds with their wartime experiences. But College life continued after the War in much the same way as it had before. Change was afoot however, and new University Statutes in 1926 and building projects within College would make the College a very different place during the interwar years.

It has not been possible to find information about all of those who fought and survived, but it is clear that there was much bravery among the members of St Catharine’s, with several receiving Military Crosses and other awards for heroism. Looking primarily at those who attended St Catharine’s between 1914 and 1918, most served in France and Belgium, though some of our members ended up further afield. Frank Bower was a member of the King’s Own Royal Regiment, who served in India as part of the Indian Army Reserve of Officers. John Bennett saw action in Egypt, and later fought in the Dardanelles campaign. Both of these men went on to have illustrious careers. Sir Frank was President of the Association of British Chambers of Commerce, receiving his knighthood in 1960; Sir John entered the Foreign Office, serving in Chile, Sweden, China, Turkey, Egypt, Singapore and Cyprus, and finally as Ambassador to Bulgaria between 1947 and 1949. He was appointed CMG in 1926 and knighted KCMG in 1950.

During the War, eight million soldiers fighting on the front were taken prisoner. One of these prisoners was Frank Compton, a member of St Catharine’s who had come up to read Maths in 1915. We are fortunate to have learnt much about his time as a prisoner of war, as his family have provided us with extracts from his diary, partly kept while he imprisoned. Reading this, the description of his capture is very matter of fact, “Followed a disused trench and fell into a trap. Was unable to leave trench owing to rifle fire from right rear and was subsequently taken prisoner, 1.30pm”. This occurred on Monday 25th March 1918. For a while, Compton was kept at Bohain, near St Quentin, where conditions were poor. Rations consisted of a fifth of a loaf of bread and a spoonful of jam in the morning, and a pint or so of soup in the evening, served into army helmets. There was no soap for washing and most men went unshaved. Compton was subsequently moved to Graudenz, a camp on the east bank of the Vistula, about half-way between Danzig and Warsaw and quite close to the Polish frontier, where he remained until his release. He returned to England, and his studies, and was awarded a second class in the Mathematical Tripos. He went on to teach Maths in a number of schools, finally as Senior Mathematics Master at Regent Street Polytechnic Grammar School (now the University of Westminster). 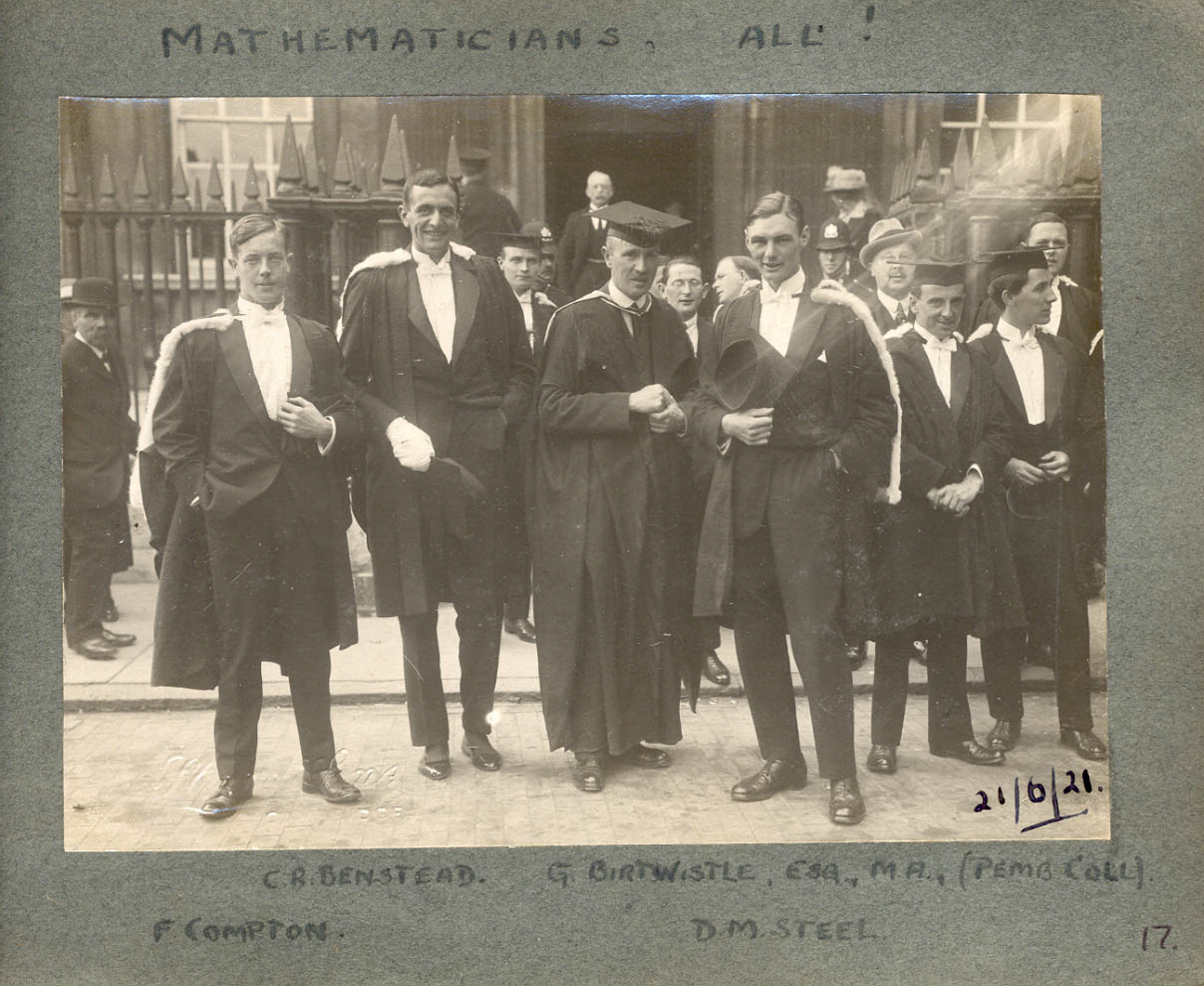 We know the Military Cross was awarded to at least three members of College: Arthur Bruce, Charles Benstead and Walter Morris. Bruce came up to St Catharine’s in 1913 to read Modern and Medieval Languages. He was awarded his MC after the battle of Cambrai. His citation in the London Gazette of the 16th July 1918 reads: “Lt. (A./Capt.) Arthur Atkinson Bruce, B.G.A., Spec. Res. For conspicuous gallantry and devotion to duty when in temporary command of the battery in an attack. Although wounded he assisted to dig out men who were buried in a dug-out, being all the time under heavy shell fire. Later, when all communication was cut off, he kept his guns in action for seventeen hours, successfully withdrawing them to an old line, and maintaining his position there.” After the War Bruce travelled to Burma, working for many years with the Bombay Burma Trading Company. He was awarded a KBE in 1943 for services to the Burmese Government in exile in India.

Charles Benstead is a name familiar to many, as editor of this Magazine from 1947 to 1972. He read Mathematics, gaining second class in 1915, before joining the Royal Artillery. He was mentioned in despatches at Passchendaele in 1917 and awarded the Military Cross for making a valuable reconnaissance for observation posts at Amiens in 1918. He returned to College to continue his Mathematical studies after the War and placed as a Junior Optime in the 1921 Part II Mathematics Tripos. He maintained his military connections upon leaving the College, joining the Royal Navy in the Instructor Branch, and retiring in 1946 as Instructor-Captain. His retirement allowed him to re-join the College in a more active role, and he held the position of Domestic Bursar and Steward in the later 1940s and early 1950s, with an active role in the Society until ill health forced his retirement.

Walter Morris studied History at St Catharine’s and was set for a career in the Colonial Office. But the outbreak of war intervened. Given a temporary commission in 1914 for the 8th Battalion of the Norfolk Regiment, he went on to fight on the Somme, for which he was awarded his MC. He reached the rank of Major, and at the end of the War continued his association with the army, being appointed a Major in command of a Cycle Battalion in the Rhineland. He is best known for his novels, particularly the mystery novel, Bretherton (1929), set in World War I. At the time of its publication, it was hailed as “the finest English war-novel yet issued” by Arnold Bennett.

A good number of those who served in the War went on to take holy orders. The horrors of war did not diminish their faith in God, as it did for some. Indeed, the Reverend Salisbury Davenport, who had studied Maths, Law and Moral Sciences at St Catharine’s, would return to serve in the Second World War as an army chaplain. Eliot Hosband, a choral scholar, was commissioned as a 2nd Lieutenant into the South Staffordshire Regiment. He was ordained in Durham in 1919 and spent most of his ministry as Rector of Wath, near Ripon. Cyril Walbank, who came to St. Catharine’s to study Classics latterly switching to Theology, was a member of the Mercantile Marine Reserve. He was awarded the Mercantile Marine Reserve Medal in 1918. He was dedicated to his ministry and died in service.

Many of those who joined the College after the War also had military experience and many College Registration forms record their military service and notes along the lines of “The war knocked plans for university to pieces” are common. Their experiences doubtless shaped their lives going forward, but recording their links to the College is an important way of remembering “the war to end all war”.