Document of the Term: Blazers

The College Archives contain a number of items not conventionally thought of as archives: rowing blades, tankards, ties, buttons, bricks and stones, keys, plaques and coins. Among these non-traditional items are College blazers. All the Colleges have a tradition of their clubs and societies having their own blazers, and indeed ties and scarves, although these days the practice is not so prevalent. Over the years the Archives have been fortunate to receive donations of blazers from old members and over the summer of 2017 a project was undertaken to repackage the blazers using acid free tissue and to house the blazers in larger, more appropriate boxes. 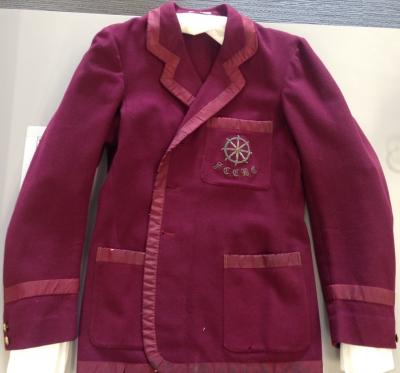 Here you can see a College Boat Club blazer. The Boat Club emblem can be seen on the breast pocket 'S C C B C', picked out in gold thread. The Catharine Wheel can also be seen. As is common with blazers of this period (this blazer dates from the 1940s), the edges are trimmed. Unfortunately, probably due to wear, the ribbon trimming is wearing through on the folds. To protect the blazer, folds and 'sausages' of acid free paper have been inserted into the sleeves and along the collar to reduce the possibility of sharp folds which will damage the material. 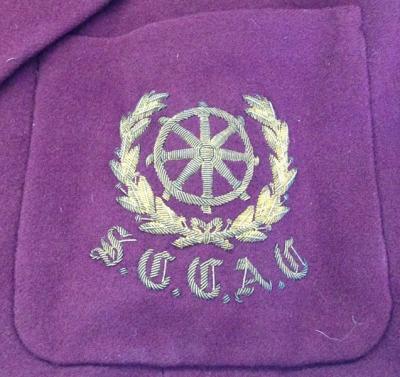 The collection also includes an Athletics Club blazer. Here is a close up of emblazoned breast pocket: 'S C C A C'. This blazer belonged to John Bertram Westcombe who was a Choral Scholar at the College and keen athlete in the late 1950s. We were fortunate to have been given the blazer by Westcombe's wife in 2015.

The College also has a College Football Club blazer, which varies in style from those above, as it has stripes. It is believed this blazer was passed down from Captain to Captain until the 1970s. Unfortunately it is not known when the practice began so we cannot accurately date the blazer. Within the picture you can see the 'sausages' of acid free paper which are helping to protect all the blazers in the collection. 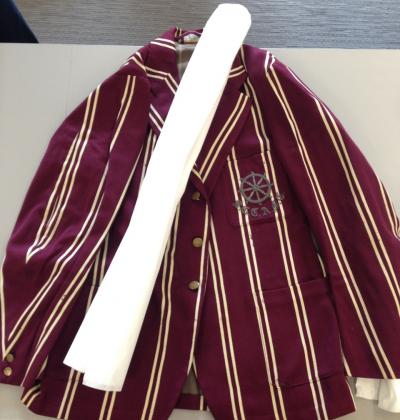 Finally the collection contains an Amalgamated Clubs blazer, dating from 1925. The stripe here is just a thin claret on a white background, with an embroidered claret wheel on the breast pocket. It had belonged to F. R. Burch, who came up to the College in 1925 and was a keen rugby player. He sadly passed away in 2000. The Amalgamated Clubs is a grouping of all the sports clubs in the College. 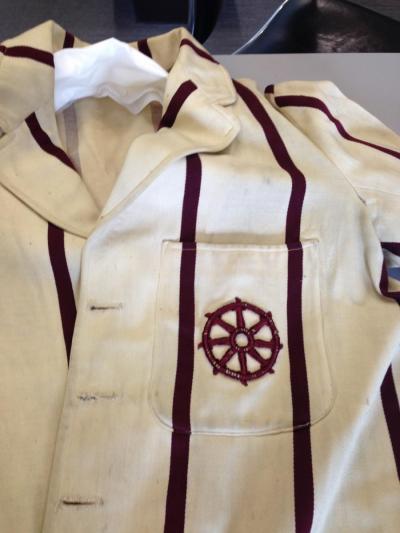