Document of the Term: A College Dinner 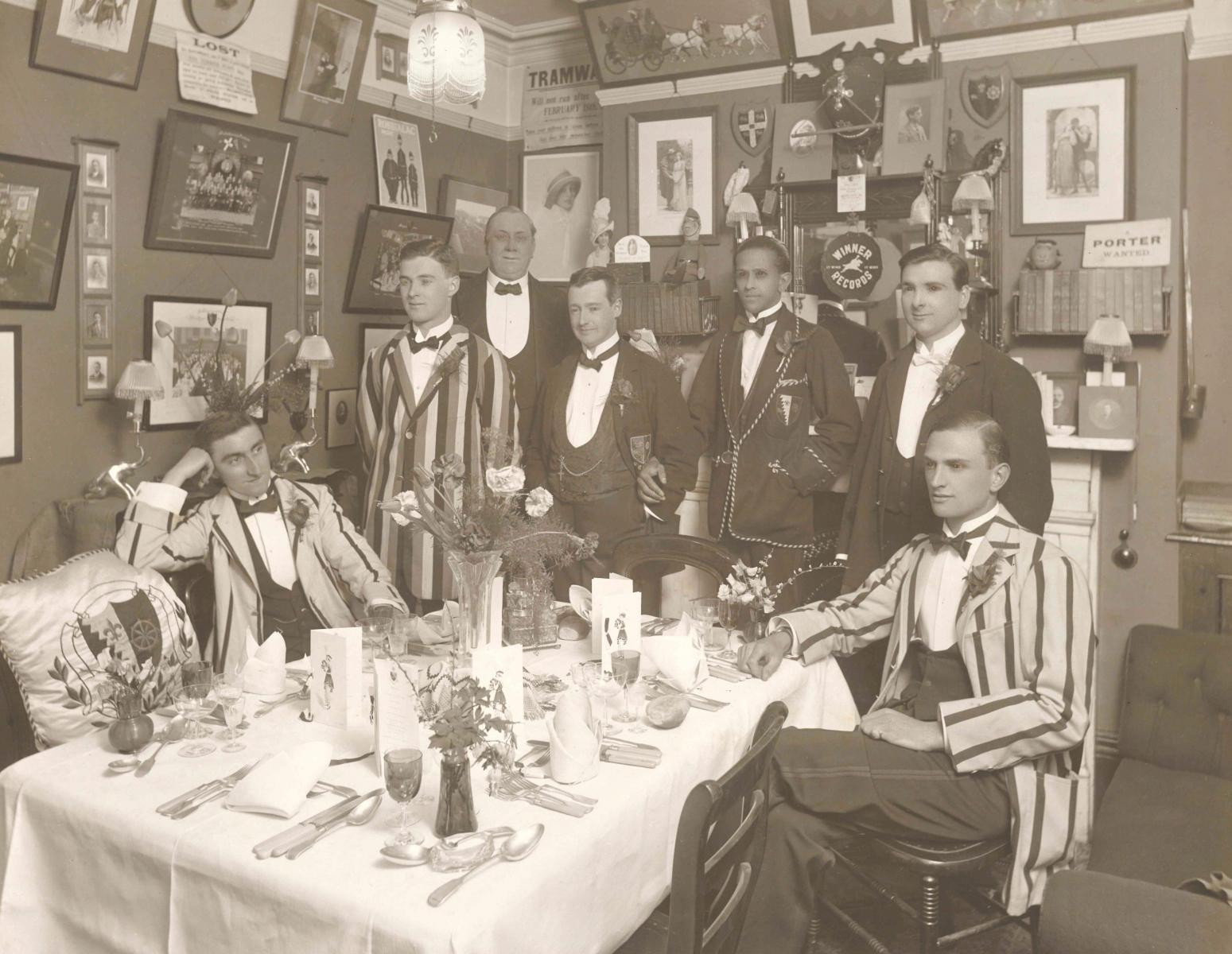 This photograph came to the College in 2017, given by the family of R. E. Livesey, who is standing in the centre of the picture, next to the man in the striped blazer, and in front of the older man believed to be a College servant. It is thought the photograph was taken in 1915, though it has the curious title of "1894-1915". The Archivist has not been able to find any significant College events occuring in either 1894 or 1915. Those featuring, from left to right are R. H. Norby, H. Webster, R. E. Livesey, E. O. Dias, J. A. V. Latham, and A. J. Easter. They have a variety of birthdates (though Livesey was born in 1894), and they did not all graduate in 1915. Perhaps the reason for the dinner will forever remain a mystery, but the photograph gives a glimpse into a very different College to that we know today.

Going round the room there are many details to pick out. Let's begin on the left with the College cushion. The Archivist has never seen a College cushion, and its prominence in the photograph perhaps suggests it was highly prized. It features the supposed arms of the College's founder Robert Woodlark on the left and the Catharine Wheel on the right. These arms have never been officially used by the College but were popular with sports clubs.

On the wall above the seated gentleman who has his head resting on his hand, there are two formal photographs. Unfortunately it is not possible to see these clearly but they both appear to have been taken within St. Catharine's - the top one in front of the archway at the back of Main Court, and the lower one possibly in what we know today as the SCR, but in 1915 would have been the College's Hall.

As we move round the room, a note about blazers seems in order. The College colours are pink and claret and although this is a black and white photograph it is easy to imagine the colour that the gentlemen in striped blazers would bring to the room! The two seated gentlemen may be in Amalgamation Club summer blazers, the man next to the seated man on the left may well have a Gazeka Club blazer, and Livesey next to him may be in an Amalgamation Club blazer. The blazer with the multi-coloured trim on the gentleman next to Livesey is not something regularly seen, but the arms on the breast pocket indicate it was a St. Catharine's College blazer. For more information about College colours and blazers, please see Professor Sir John Baker's excellent article in the 1987 College Society Magazine (pages 35-36).

Returning to the walls, we can see they are crammed with images of individuals and posters - in many ways similar to what goes up in a student room today, though the fact that almost everything is framed does provide a contrast! Would College meetings back then have discussed the problem of nails in walls, as opposed to today's bluetack problems? Near the College servant is an image featuring three policemen. They are advertising Robbialac paint, which came from a London based company who had originally specialised in varnishes. The walls also feature posters for 'Lost', 'Tramways' and on the right of the fireplace 'Porter Wanted'. The Tramways poster notes that the trams "will not run after February 18th". This is a poster noting the end of trams in Cambridge. They finished running on the 18th February 1914 in response to increased competition from motorised buses. For more information about Cambridge Trams have a look at the Cambridge Historian blog. Propped upon some books to the left of the fireplace, there is a doll in military uniform. This may have been made by Dean's Rag Book Company who specialised in cloth books for young children, but latterly diversified into teddy bears and other soft toys. There are also elephant lamp stands on a sideboard on the left.

Moving to the fireplace itself, we can see a record hanging in the centre: "Winner Records". This is a vinyl record, produced post 1912. We know it was produced after 1912 as this is when Edison Bell released the 'winner' label onto the market, just 3 years after he set up his company in 1909. Subsequently, the company was taken over by Decca Records, a well-known label today. Near the top of the firepace, on either side, are University and College arms on small wooden shields. The Archive has an example of these and until this photograph arrived, it was not known what they were used for. They may have been found in many student rooms, showing loyalty to University and College. There also hangs a helment. Not enough detail can be made out to discern anything about it, but it could be military or police.

The photograph provides a glimpse into a world that the First World War brought to an end. Fortunately, none of those featuring were killed in the First World War and several kept in contact with the College. Livesey became a vicar, Dias worked as private secretary for a number of Sri Lankan Supreme Court Judges and Latham worked in India. The photograph shows a clear loyalty to the College, with lots of College emblems dotted around the room.

The Archive is always grateful to receive material such as this, and any questions can be directed to the Archivist, Lizzy Ennion-Smith (archivist@caths.cam.ac.uk or 01223 338343).

May 2018: We are pleased to have received lots of positive feedback on this piece. We have also received a suggestion that the photograph could have been taken at a dinner to celebrate R. E. Livesey's 21st birthday. Livesey was born in 1894 which would have made him 21 in 1915.